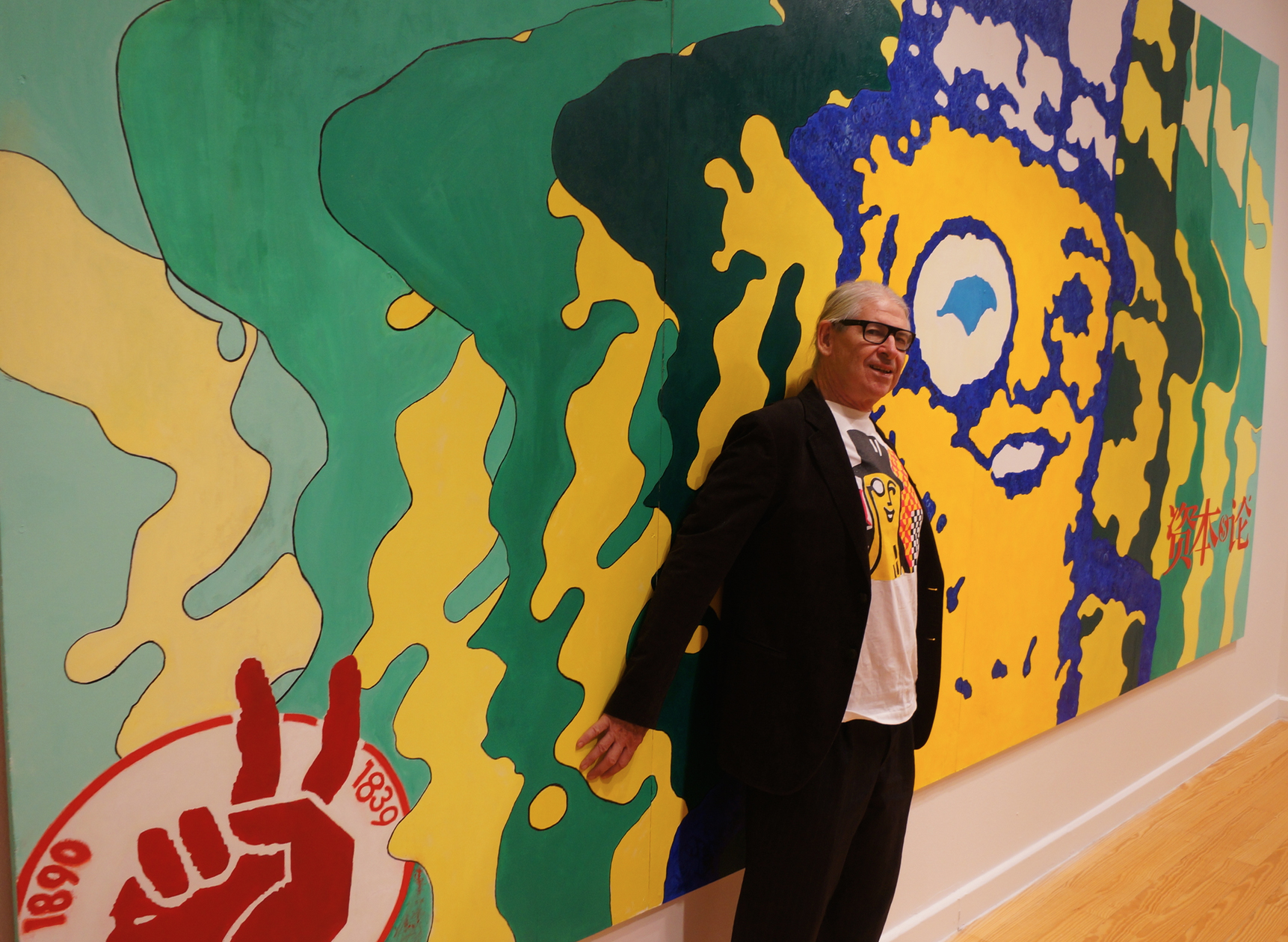 Clark V. Fox (aka Michael Clark) is known as “the Godfather of Modern Underground Art,” with a career that includes his work as part of the Washington Color School,  to modern pop surrealism and pointillism with a leftist message of justice and equality.

Clark is known for his opinions on “Mr. Peanut,” a symbol of corporate greed and ruthlessness:

My Mr. Peanut paintings capture my disdain for war and the warmongering, profiting capitalist whose business profits from the death of the innocent. History has always rewarded greed, and the military-industrial complex shows no sign of weakness. Our democracy has been stolen. We kill for money. And we, the people, fund this madness. 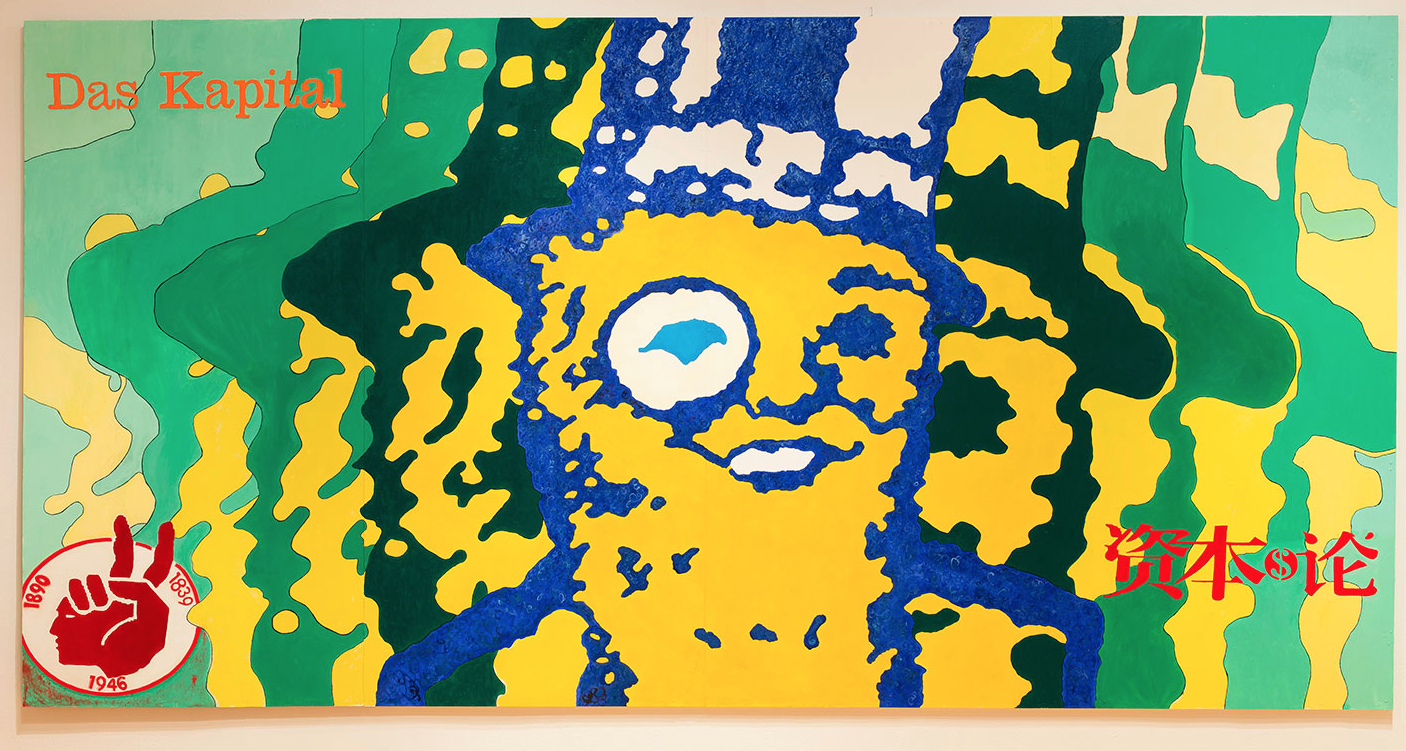 The Artist’s View
“Das Kapital is a reminder to all of us to understand the problems with the kind of hypercapitalism that the US is dealing with right now. Mr Peanut represents a carefully engineered illusion of constantly expanding markets accompanied by a perpetual military war machine that Marx warned in the later stages of capitalism.

“The system is spiraling out of control… “The need of a constantly expanding market for its products chases the bourgeoisie over the entire surface of the globe”. It would in its final stages pillage the systems and structures that made capitalism possible.

“The Native American symbol in the painting represents the idea there will be no genuine democratic, social, economic or political reform until we halt our permanent war machine. The Chinese symbols spell DAS KAPITAL to remind us of the Chinese ever expanding capitalist system too – capitalism with Chinese characteristics.”

In the mid 1970s, Clark turned to the figure of Mr. Peanut as a subject in his work. Mr. Peanut has thrived among the cultural icons that constitute Clark’s vocabulary and has become a handy vehicle for commenting on consumerist culture and brand-name iconicity. Bedecked with a monocle, walking stick and top hat, Mr. Peanut hails from the era of industrial capitalism, or, more properly, from an American imagination that casts the successful tycoon as its ideal. Clark is constantly dressing Mr. Peanut up and giving him new roles: he becomes a portrait subject, a right-hand man to Mao and Chavez, or “Afro-Nut,” Mr. Peanut’s black cousin. In the Who Would Jesus Bomb? series (2004-2008), he stands below the emblazoned question, his smile and jaunty stance reminiscent of a televangelist or perhaps a profiteering promoter of the military-industrial gospel. He even begins to look like a devilish version of the top-hatted Uncle Sam, cheerily calculating our best bet for war-mongering. Mr. Peanut was actually used to sell war saving stamps in World War II. Clark notes biting ironies and unexpected consonances in each work, but the overall impression is of a feverish and wacky meaninglessness, an icon devoid of any inherent value. As the consummate “shell,” Mr. Peanut captures the emptiness of consumer culture, both the absurdity of the commodity as fetish and the unreal, spectacular language of advertising that promotes it.

If the husk-like Mr. Peanut levels a critique of society along the lines of Guy Debord and the Situationists, he also engages in a quieter but nonetheless potent celebration of a more personal visual vocabulary. In Clark’s paintings, the soul is in the brushwork. The real animation lies in the colors, the gestures, the build-up of multiple styles and manners, or (in the wooden sculptures) the accretion and arrangement of collage elements. For all the emptiness at the core of his subjects-exposed as commodities, murderers and blank ciphers-there is a teeming activity at their surfaces. Clark builds up the backgrounds and the rendering of Mr. Peanut himself with a diversity of handling, from the messily abstract to the rigidly checkered, from pure golden sheens to intense, deep reds. Each Peanut portrait seems imbued with a distinct aesthetic liveliness: in some, textural modeling clay is applied to the backgrounds; in others, wooden collage elements are attached. Clark himself has explained Mr. Peanut as a fetish object, and indeed there is something about the hyper-attentiveness to the garb and guise of these icons that marks them with an animating force. Clark’s visit to the Musée de l’Homme in Paris in 1970, where he was especially struck by African fetish sculptures, was a precipitating factor in his development of Mr. Peanut. We can see an analogy between the accrual of metals, nails and objects in religious figures like Kongo power sculptures and Clark’s layering of materials and gestures in his own paintings. Both insidiously consumerist and aesthetically powerful, Mr. Peanut elicits, like all fetish objects, a very ambivalent response. Even while attentively crafting new portraits of him, Clark admits, “in a way, I hate him.”

Below: Who would Jesus Bomb?
ACRYLIC AND OIL ON CANVAS 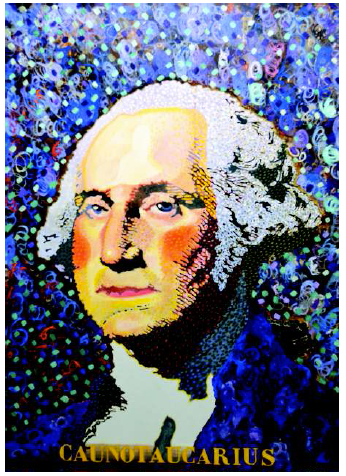 George Washington, the “Father of the Nation,” is not a hero.

A frequent subject is George Washington, the illustrious founding father whose image has been memorialized in both high-art history painting and the everyday currency of the dollar bill. This is precisely the juncture from which Clark’s own portraits depart. His Caunotaucarius (George Washington), 1990-1998, takes the 1796 Gilbert Stuart painting (the visage reproduced on the one-dollar bill) as its model, rendering the familiar features with a rash of unfamiliar handlings: pointillist dots and map-like color areas in the face and hair, and painterly scrawls in blue and purple in the background. Clark both stresses the mass-printed flatness of the figure, painting in, for example, graphic cross-hatchings to render shadows, and endows it with a new coloristic intensity. Written at the bottom of the canvas like the title of an official portrait bust is the name “Caunotaucarius,” the Native American epithet for the president meaning “Town Taker.” With this second narrative inserted, the familiar Washington slips into a different sort of role, his steady presidential gaze shading into one of unnerving complicity. 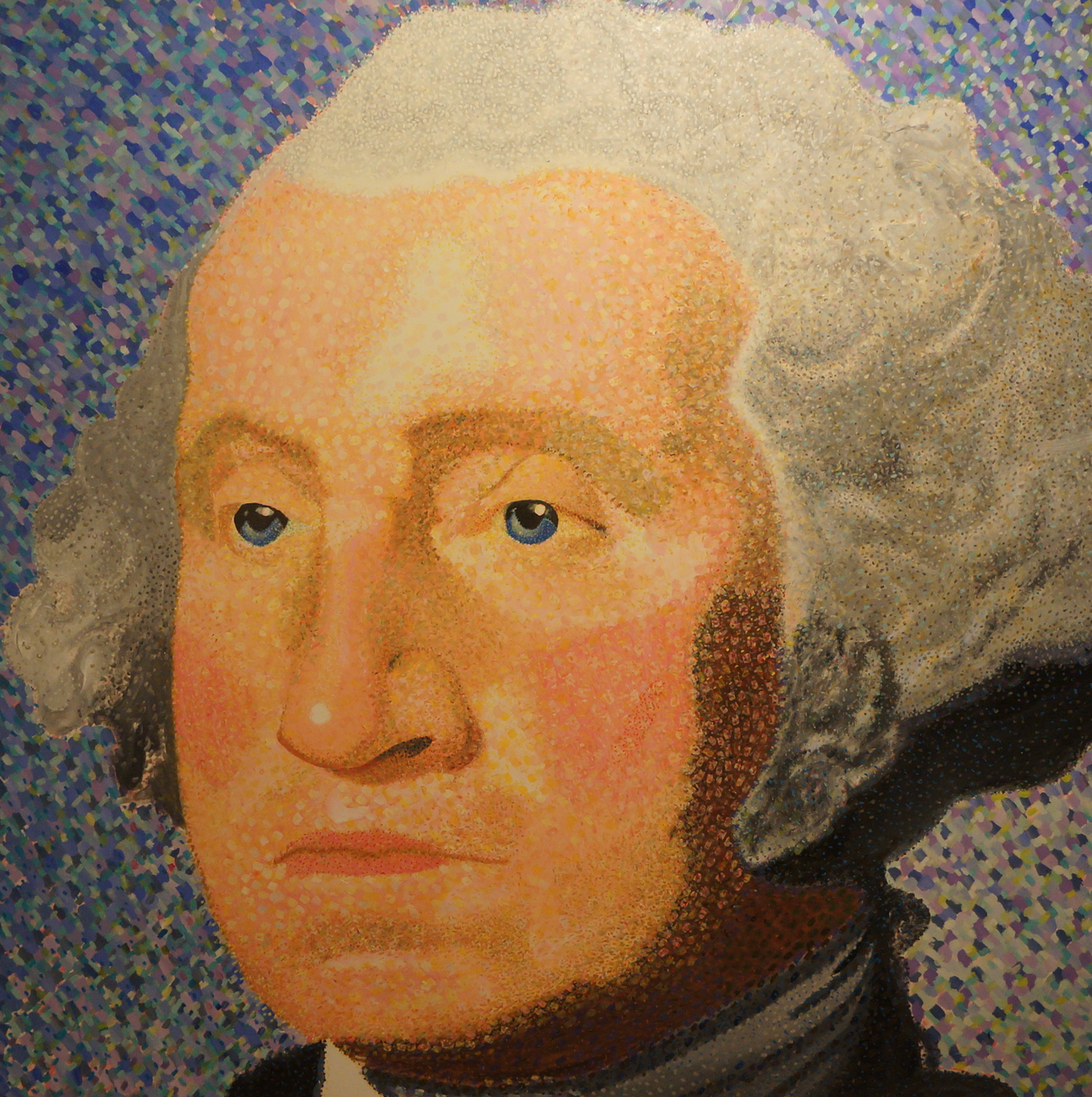 Clark himself makes his intentions clear:

Much of my work is about putting new endings onto old stories.  Being a Native American, from Cherokee and Powhatan descent – my works recasts the history of America from that perspective.  Like Christopher Columbus before him, George Washington is no hero.

In his long career, Clark has taken on the injustice of transnational trade agreements through his art of protest.

Clark’s series, 200 Nafta Oranges  was begun after the North American Free Trade Agreement went into effect in 1994 – all modeled after fruit Fox purchased from a Mexican National on the side of the freeway. The humble commodity is given an elevated status through their individual treatment, vibrant backgrounds and pristine, glossy surfaces. Fox underlines the importance of such mundane items as oranges in international politics as well as how such items are imperative to an individual’s survival and identity. Each is done in the style of traditional still-life painting but, when arranged within a regimented grid, the effect is one of minimal abstraction, blurring the viewer’s initial perception – much like the perpetually swaying debate over the Agreement. 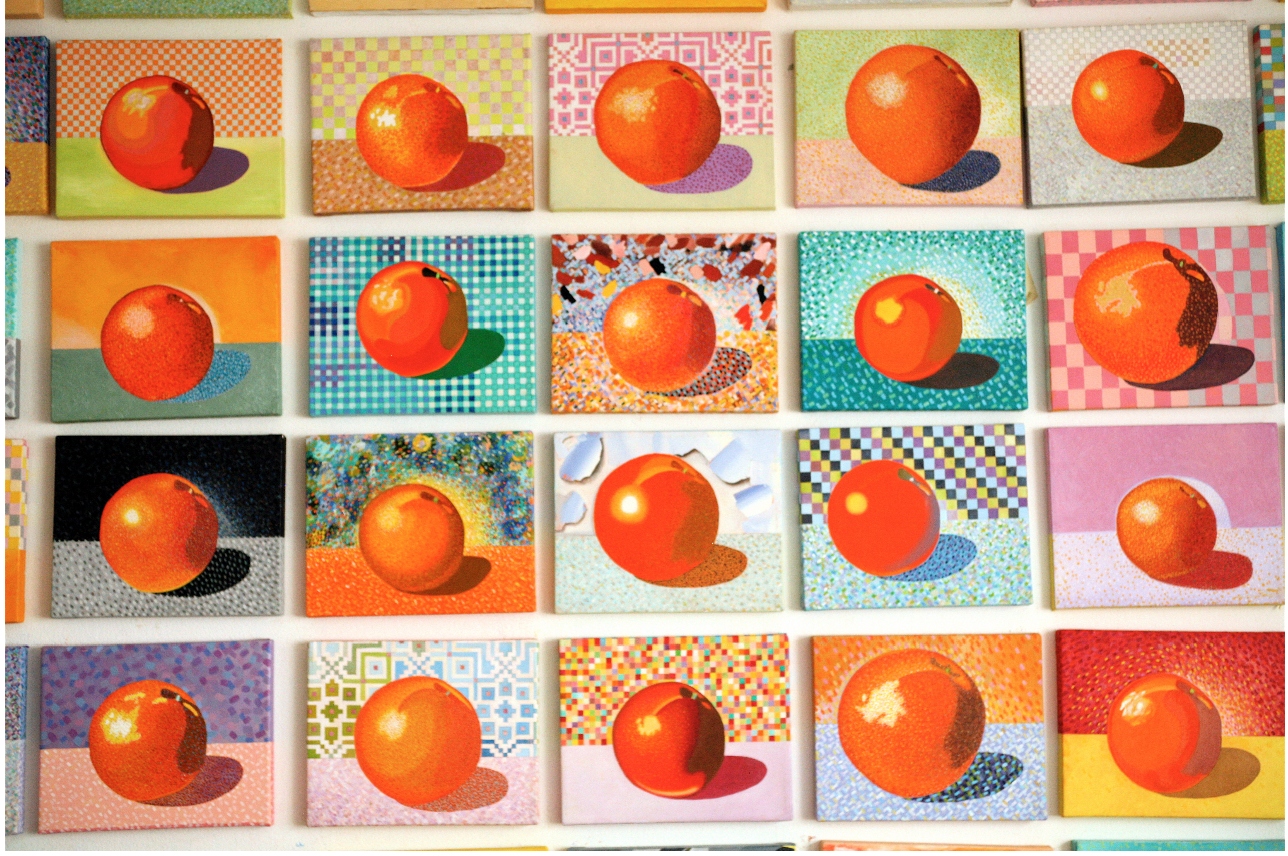 Of course, Clark is opposed to the TPP as well. We look forward to discussing more of Clark Fox’s work in the future.