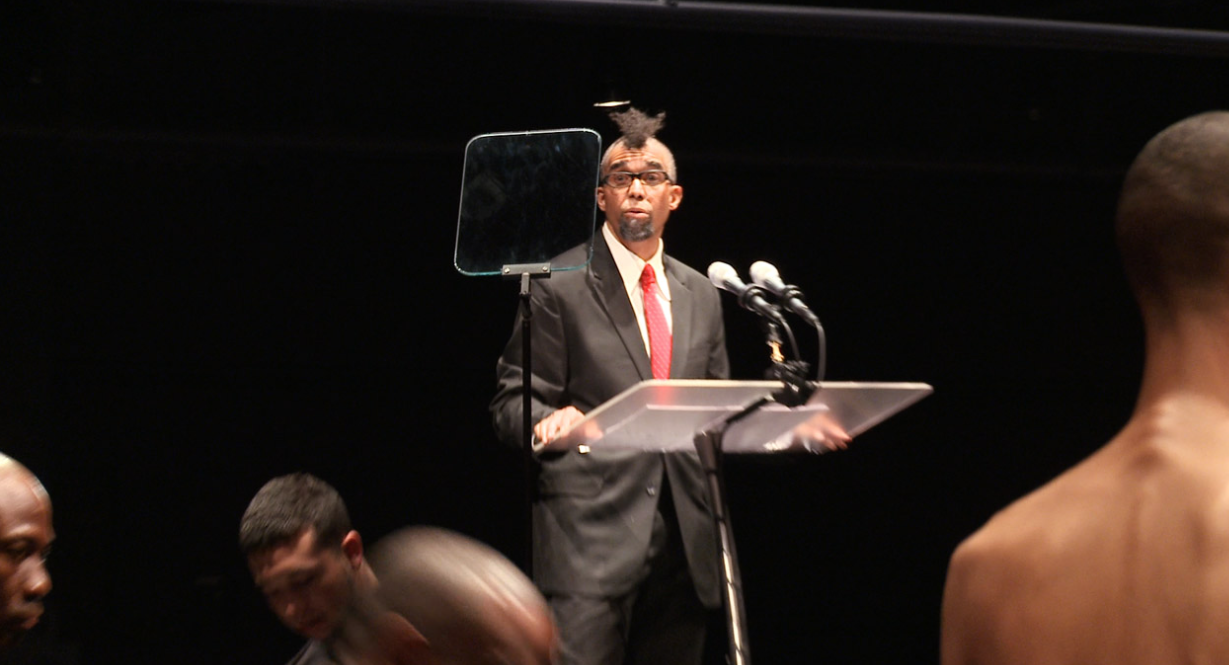 Money to Burn shows us a performance on Wall Street, with the artist walking down the street, a pail of water in hand, a lighter in the other, as he sings a catchy phrase – “money to burn.”  To the amazement of onlookers, Scott lights up money—singles, fives, tens, and twenties, one bill at a time, dousing the disintegrating notes in his pail of water.  He encourages traders and tourists alike to join in by asking – “Does anyone have money to burn?” 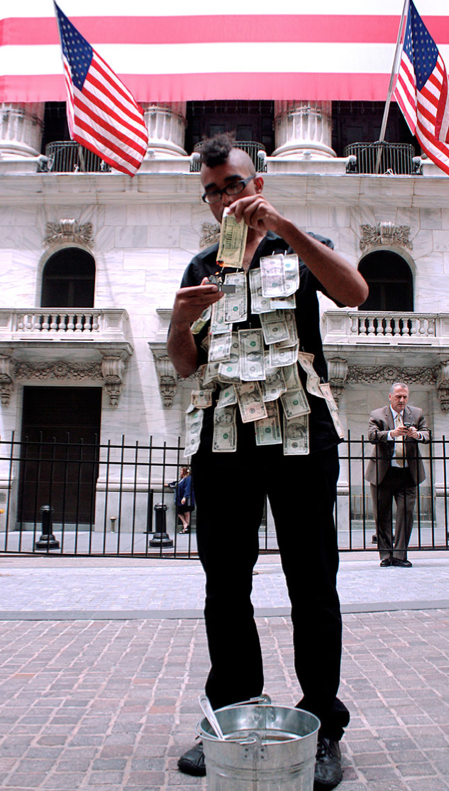 Soon a group of policemen surround Scott, demand his license, threaten him with arrest, and discuss his role in creating a “public disturbance.”

A polite Scott agrees to stop immediately, and after some back and forth – a policeman half-heartedly tries to block the filming of the performance – walks away chanting “money to burn” in the same tone as you might say “bring out your dead.”  The crowd claps and cheers as he strides away.

It is not lost on us that Wall Street has orchestrated the greatest destruction of value of money since the Great Depression – without any consequences whatever.

Dread Scott Decision is a disturbing video performance that shows a group of four nude black men guarded and controlled by two German shepherd dogs and their handlers.  The audience was also part of the performance. They were corralled into a line and asked to go one at a time into a “voting booth” to vote one at a time and respond to questions within the booth. To get to the booth they had to pass through the line of black men. In the background, the artist Scott reads from the text of the 1857 Supreme Court Dred Scott decision, which ruled that slaves were property and were “so far inferior, that they had no rights which the white man was bound to respect.” 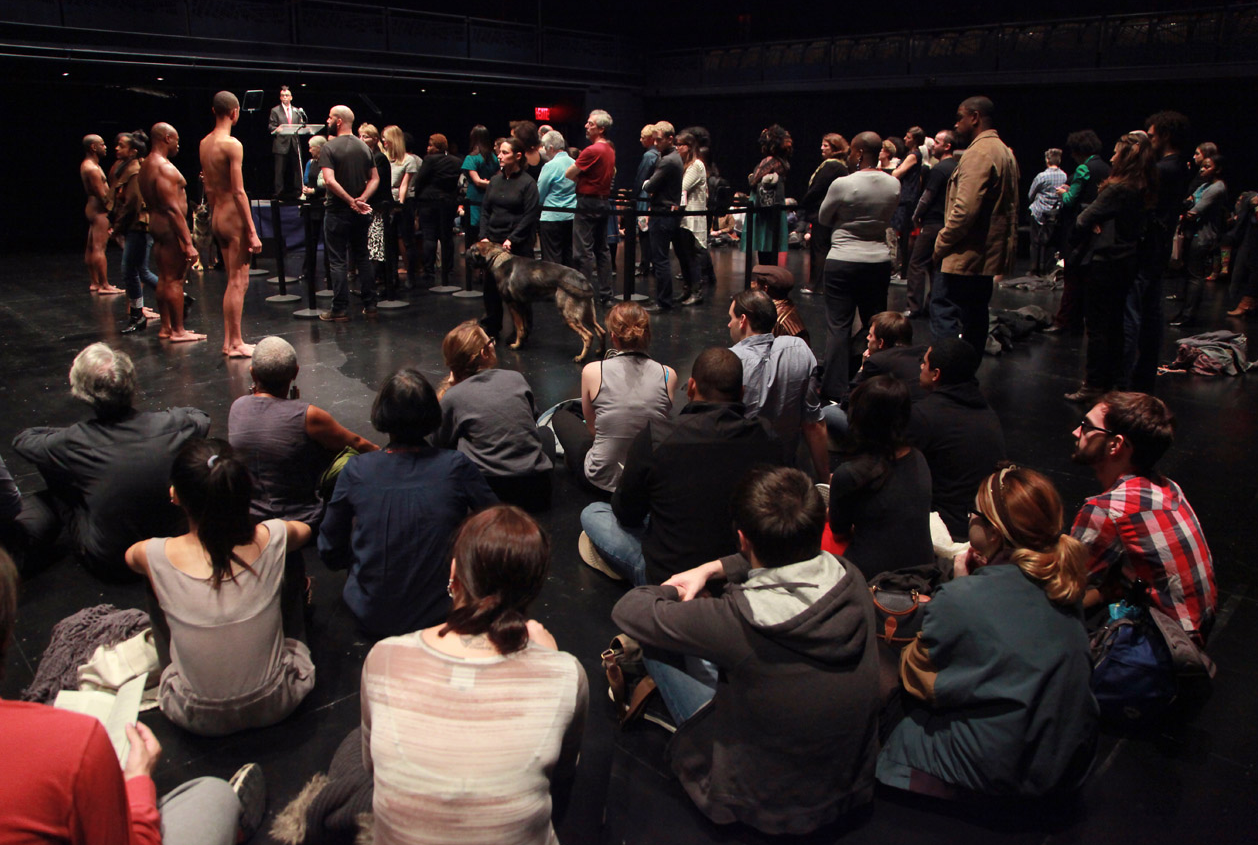 Scholars have hailed the Supreme Court Dred Scott v. Sandford decision of 1857 as the worst decision in the history of the Court.  The Court held that African Americans, whether enslaved or free, could not be American citizens and therefore had no standing to sue in federal court.

And irony of ironies, in our present time, the Supreme Court has ruled via Citizen’s United that corporate political spending is protected, and that corporations have a First Amendment right to free speech.

Dread Scott is a revolutionary who, by his own admission, creates “revolutionary art to propel history forward.”  Unfortunately we seem intent on propelling history backwards.

Scott’s personal view is that a tiny handful of people control the great wealth and knowledge that humanity has created. It is a world of profound polarization, exploitation and suffering and billions are excluded from intellectual development and full participation in society.   The billionaire class. (Bring the pitchforks!)

I forgot to mention that Dread Scott first received national attention in 1989 when his art incited national debate over its use of the American flag.  President George H.W. Bush declared his artwork What is the Proper Way to Display a U.S. Flag? “disgraceful,” and the entire US Senate denounced this work when they passed legislation to “protect the flag” (Flag Protection Act of 1989). 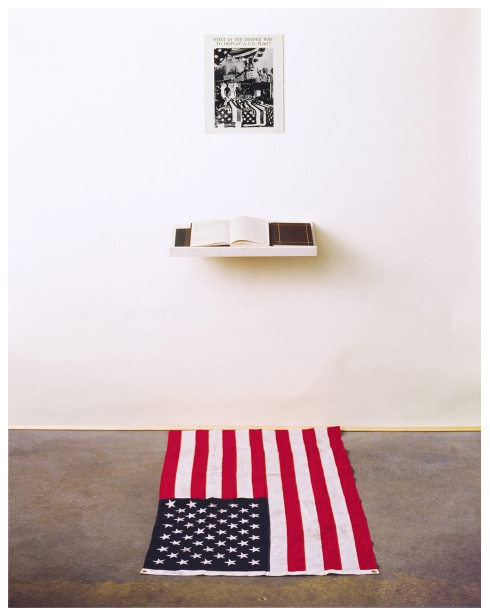 To oppose this law, which would effectively make patriotism compulsory, Scott, along with three other protesters, burned flags on the steps of the Capitol building in Washington, DC. Ultimately the issue resulted in a Supreme Court case which invalidated the federal law against flag desecration as a violation of free speech under the First Amendment to the Constitution.