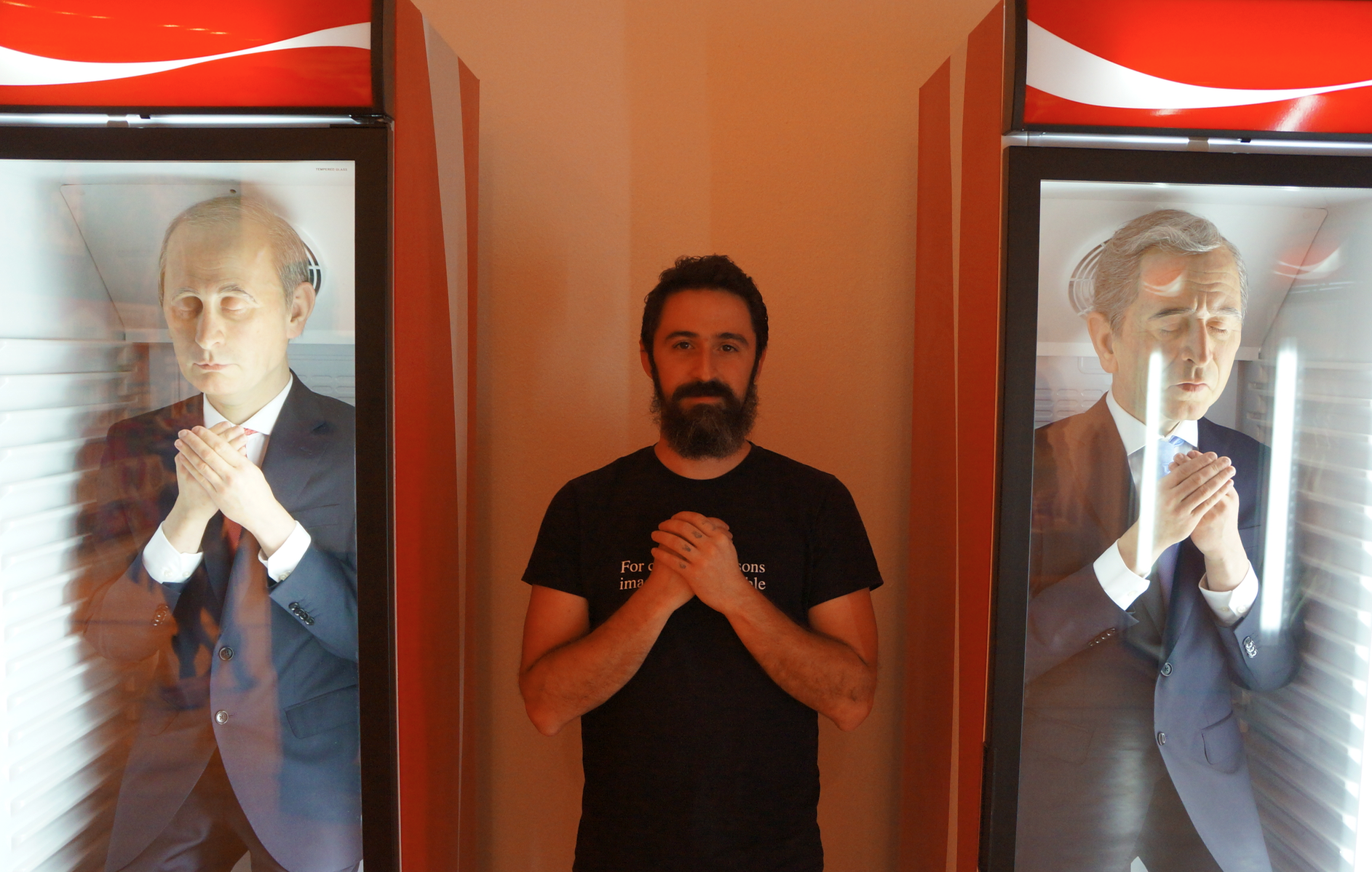 The works of Spanish-born artist Eugenio Merino deal with matters such as politics, religion and society with the purpose of making us question our assumptions – the truth we are told by society, by the images and constructs of the dominant culture.

“My work is about our relation with the world we live in and its connection with humor,” says Merino. “Issues such as rising inequality (Joseph Stiglitz), the McDonaldization of our society (George Ritzer), the effects of Capitalism and the power of brands (Naomi Klein), our beliefs, our history, and our present.”

Let’s take a quick tour of Merino’s art, beginning with a series of sculptures of world leaders “frozen” inside refrigerators decorated with a familiar corporate “logo.”

The sculptures are about how certain politicians cast a long shadow over the countries they rule – propped up by corporations. Now, sometimes I feel like corporations are the new dictators,” says Merino with a gentle smile.  He is serious as he talks about how societies are trapped in the frozen ideologies of their dominant leaders – some dead, some alive. “In Spain we still feel the ghost of Franco.”

The mesmerizing faces of the “frozen leaders” are both ghoulish and funny at the same time:

Born in 1975 in Spain, Eugenio Merino graduated from the Complutense University of Madrid.  He has had numerous solo and group exhibitions and has participated in a variety of art fairs, including Volta NY, Volta Basel, ARCO (Madrid), Art Brussels, FIAC (Paris), Armory Show, Arte Fiera (Bologna), Art BO (Bogota), MACO (Mexico), Art Wynwood (Miami) and has exhibited in the MOCA Museum of Taipei and the B.P.S.22 in Charleroi (Belgium).

Across town, at his solo show, we meet the artist standing below another  familiar symbol made of laser-cut aluminum and enamel: 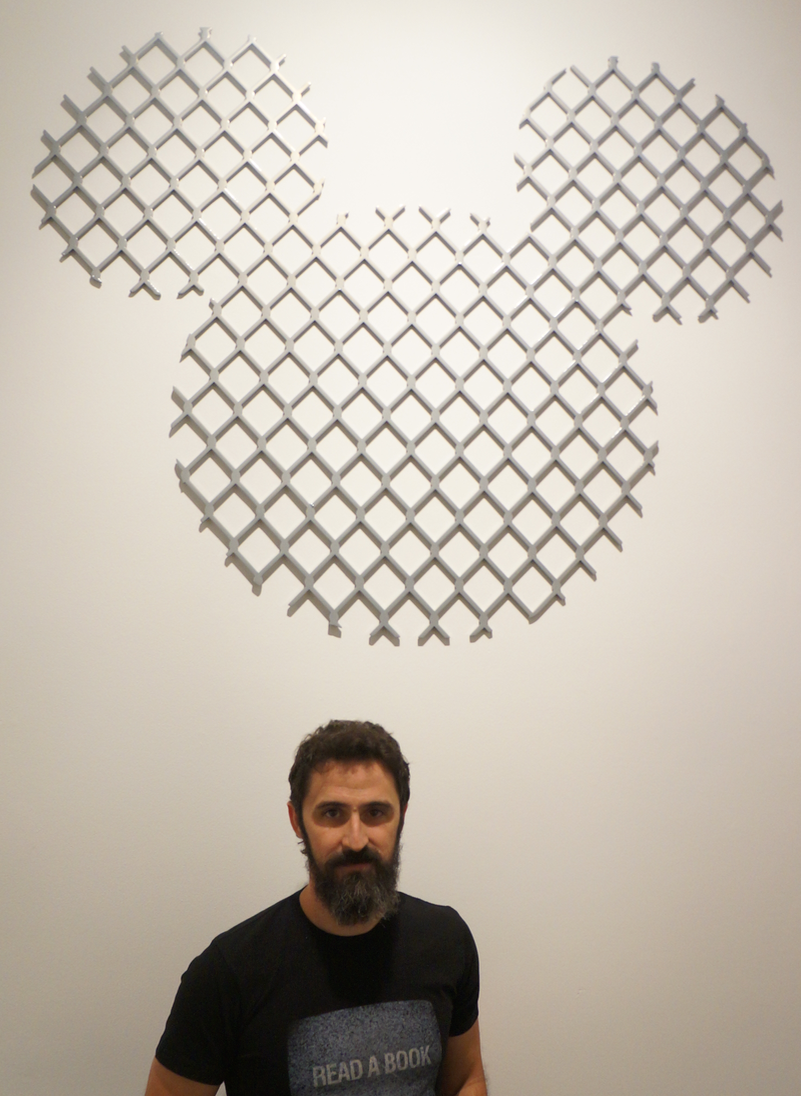 “DISNEY is a trap,” explains Merino. “You’re free to do whatever you like, as long as it’s sold to you by DISNEY.  We live our lives in cages, designed and manipulated by the corporations under the illusion of freedom.”

A young fan pauses to stare at another of Merino’s works and says: “It’s got horns, like the Devil.”

Merino tells me something I haven’t thought about before.  Anonymous, the hacker organization, is faceless, its members hidden behind the infamous mask.  But he asks me to consider that the 1% – the true rulers of this world, are also anonymous and faceless.

Across from the mask of inequality is a solid cube – a block – suspended above what looks to be a disheveled, gray-haired, homeless man sleeping (or is he dead)?  The man’s fingers point upwards – a hopeless prayer, perhaps? 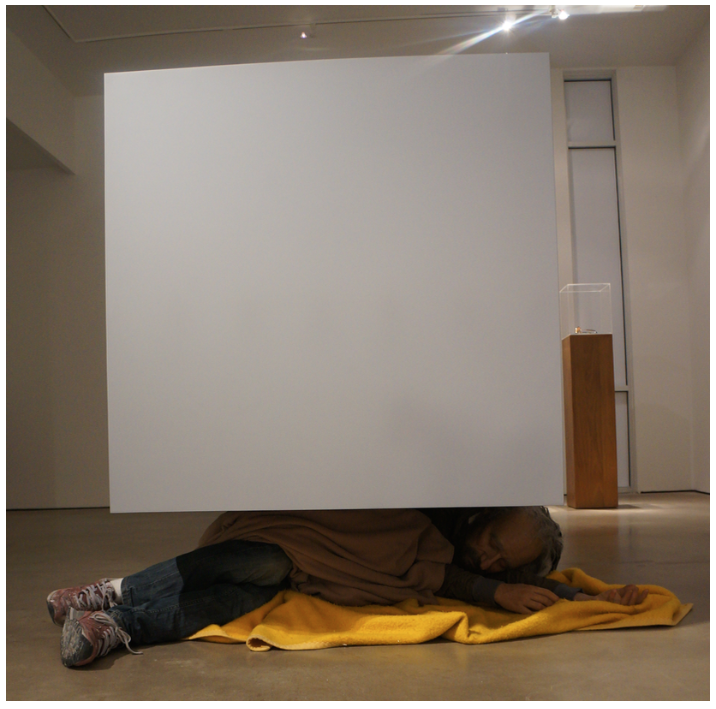 Behind the homeless man, under glass, sits a pair of luxury glasses which look rather stylish until you notice the mushroom clouds on the lenses: 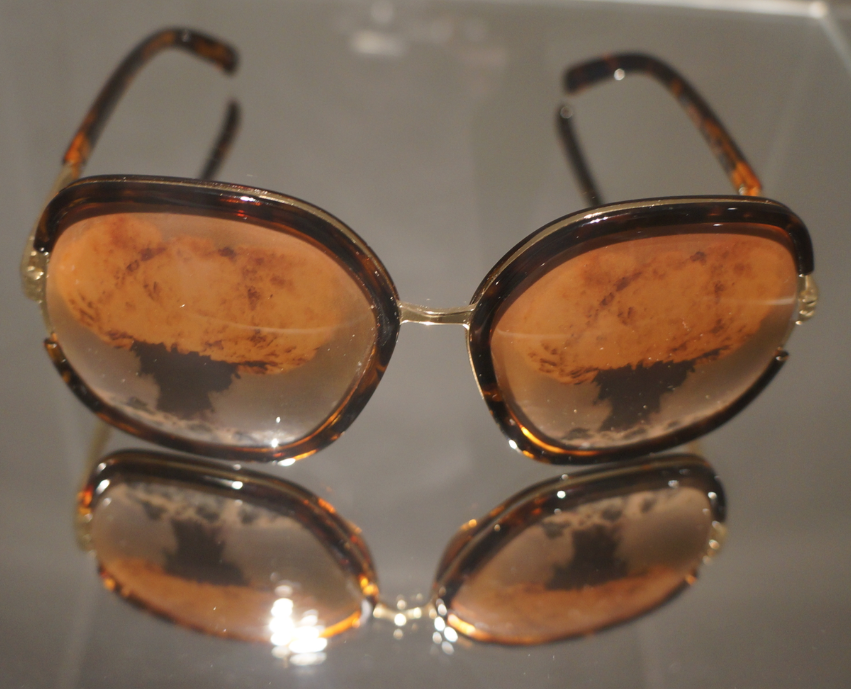 Once again, Merino is concerned about inequality and its effects.  The rich are destroying the world, through willful ignorance or, more likely, through active exploitation of its resources.

Who killed the Earth? Looking back, as I write this, I think of Bill McKibben’s arrest at a gas station in Vermont.  All we do is – nothing. 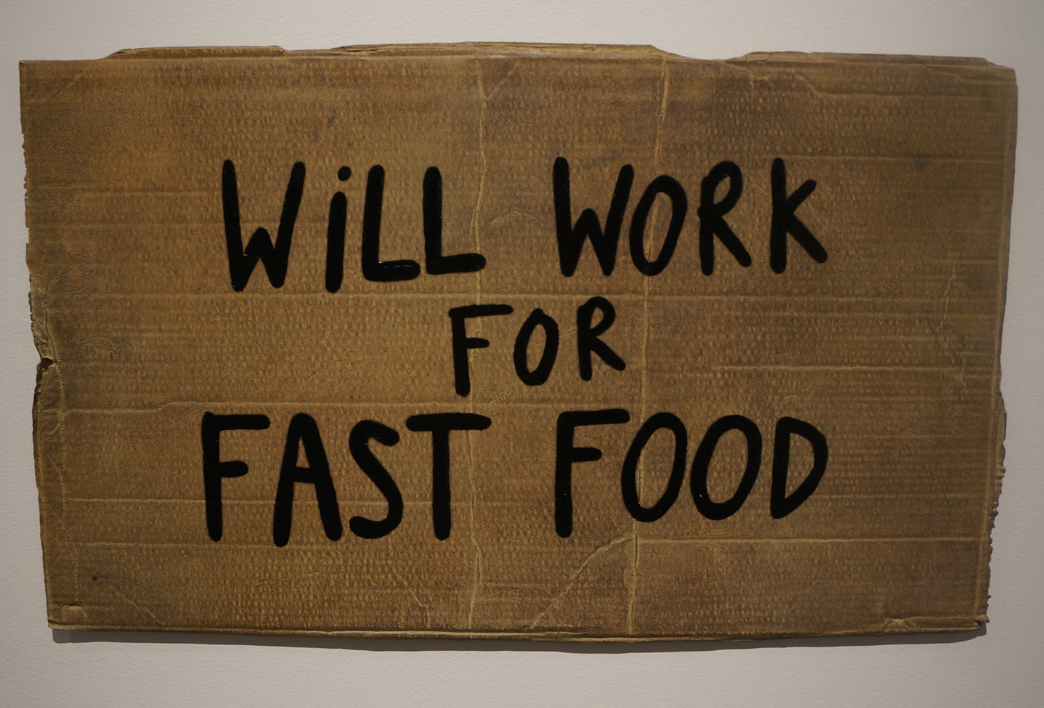 The sign is made of bronze, and is typical of the signs you see on the streets of Houston.  Merino tells me he is stunned by the number of homeless people he has seen in Houston.  I ask him why he chose bronze for the placard.  His answer is once again thoughtful and provocative: “I wanted to show how heavy the burden of poverty is – and how it is also noble. The poor have few options for good food, and everywhere we see growing unemployment.”

I asked Merino if his work gets him depressed.  He smiles yet again, and gently says that the only choice we have is to laugh.