Considered one of the world’s most controversial artists, Michael D’Antuono is known for making art that challenges people to think more deeply about sociopolitical issues. His collectors range from Arnold Schwarzenegger to Pete Seeger and his work has received high praise from fellow artists Shepard Fairey and Banksy.

Michael D’Antuono studied illustration at Parsons New School of Design. His artworks have been used for the front pages of the Wall Street Journal and the Washington Post. As an art director at New York ad agency DMB&B, D’Antuono produced notable award-winning campaigns including the Fixodent & Forget It campaign which is still running twenty-seven years later.

I asked him what made him become an activist artist.  His reply reflects a profound commitment to his art:

“I inadvertently fell into it. When I left advertising, I started painting innocent portraits of iconic figures using symbolism and settings that best represented their image. When I announced that I was going to exhibit an installation in Union Square of my painting of President Obama (wearing a crown of thorns) on his 100th day in office, all hell broke loose. The conservative media riled up the Religious Right, who then planned to bus protesters in from all over the country. I also received thousands of very angry and sometimes threatening emails. Concerned about my safety, my family pressured me into canceling the installation. I immediately regretted canceling the exhibit. I vowed that from then on, I would make the art I want to make and say what I want to say, never again allowing anyone to violate my first amendment rights just because they don’t agree with me. So I’ve been creating a body of work that speaks to the issues that concern me ever since.” 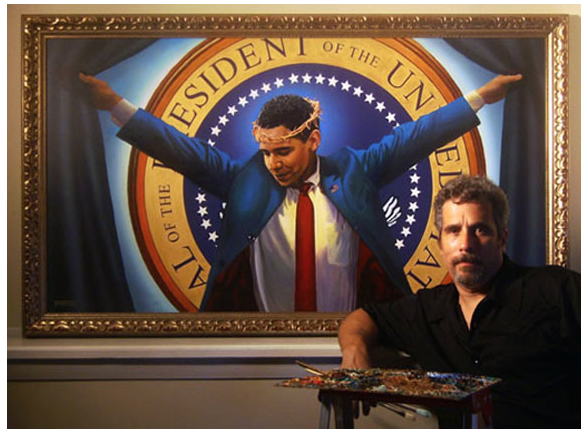 D’Antuono’s art is an exercise in redemption. His advertising experience informs his work:

“My experience as an adman taught me how to influence public perception and how to sell a product or an idea. I also saw how little respect for the masses these manipulators had and their willingness to convince the public that they need things that were not necessarily good for them. It got to the point for me where I would sit in meetings no longer willing to contribute. My advertising experience did however, teach me the mechanics of public persuasion, thus allowing me to see through the ‘FOXshit’ that the corporate elite has used to sway public opinion and convince half of the country to vote against their own best interests. So for the last 6 or 7 years, I’ve been trying to redeem myself a bit by using those skills to encourage people to question the messages they are fed and to think objectively about important issues.”

D’Antuono’s expresses his righteous anger through works like Blood Money: 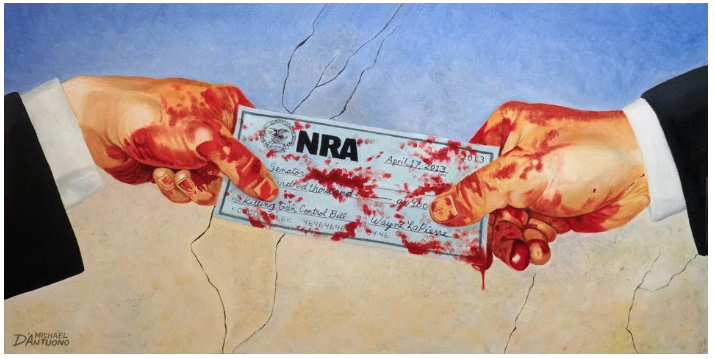 “Blood Money explains why we do not have meaningful gun control in America. In the wake of Newtown, 44 senators disregarded the will of 90% of Americans who support universal background checks for gun buyers by not even letting a bill come to the floor. They willingly put more innocent lives at risk just to ensure that their campaign contributions from the NRA keep coming. This is the most blatant and egregious example of special interests subverting our democracy with great sums of money. The sole reason for the NRA’s existence is to lobby congress not to create any gun control legislation that might hurt gun & ammo sales no matter regardless of the cost in human lives. Only in America does the profits of gun and ammo manufacturer take priority over the safety of their citizens. The cause of death on the death certificates of mass shooting victims is usually listed as gun shot wounds, but that’s not the real cause of death. The real cause of death is greed. The greed of the gun and ammo manufacturers, the greed of the NRA, and worst of all, the greed of the politicians who take their money.”

Ron English has dubbed D’Antuono “The Norman Rockwell of the Revolution.” 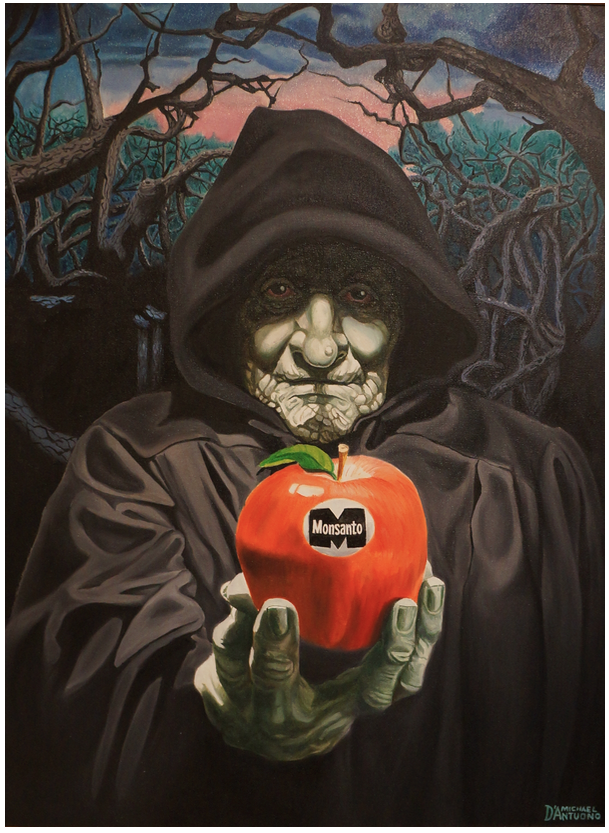 D’Antuono was enraged that George Zimmerman had the gall to capitalize on his notoriety gained by killing an unarmed youth, by auctioning his first painting on eBay. It was reported that a Zimmerman fan bid $100,000 for the novice painter’s first attempt. As a show of support for victims over racist killers, he decided to auction his painting, “A Tale Of Two Hoodies” on eBay and donate half of the proceeds to The Trayvon Martin Foundation. On the second day of my seven day auction, Zimmerman’s came to a close, rewarding him with six figures. D’Antuono was informed that the bids on his painting had already reached $25,000 and then $50,000. With five more days to go, he was sure to pass Zimmerman’s numbers, earning the foundation some funds and more importantly, proving that we live in a just society. 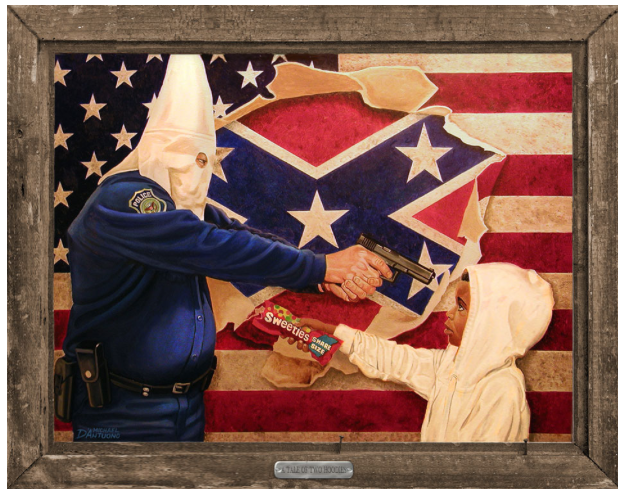 “Then I got a call from eBay telling me that they removed my auction for violating their policy of not promoting hate groups. I mentioned that my piece was anti-KKK, and in fact I was donating money to the foundation named in honor of the victim killed by the very man they just allowed to complete an auction, but they failed to see the irony or their own hypocrisy. They sidestepped my logic by telling me that my auction violated their strict policy of never selling any KKK related items. The next day, a fan asked me to type in KKK on eBay. When I did there were over 1,500 KKK related items. You can make of that what you will.”

He explains his views:

“Despair thrives when there is helplessness. Staying active in the fight for social, economic justice is empowering. Of course, we have to accept that you can’t make everything right. The battle between the haves and the have-nots has been going on since time began. The best we can do is to do our best, rest up and resume the fight the next day. That said, we live in an unprecedented time when more is at stake than just human rights. A combination of greed, fossil fuels and overpopulation has created a perfect storm in which we are destroying the very planet we depend on for our existence. On second thought, we may all have to be a little more active with this one.”